Recently Scrivs had his first game of Gaslands.. being Scrivs, within the space of a week he'd already got all the gear and built and converted a whole bunch of vehicles! I've got  a few cars and a rudimentary grasp of the game, having played some solo games, and one at the Polly club years ago.. so we met up on Sunday for a 50 cans deathrace!

We picked two teams without any Sponsors or perks.. my '99 Specials' consisted of ice cream van, Mr Whippy, and two cars; Firkle and Mazda Mike. Nothing was particularly powerful.. a smattering of MGs, a ram and a smoke dropper brought me up to 50 cans pretty quickly. Scrivs had the Reds with a car and three buggies, one of which sported a harpoon which I was mildly apprehensive of!

I won Pole and decided to stick Mr Whippy on the front row. He was the first out of the gate, 'Greensleeves' on full blast, as he rolled, pushed it and ended up with a slide and a slide, leaving him side on to the pack! Chaos predictably ensued, with shunting and swerving up the first gate, leaving Mr Whippy snuggling a container, one buggy wrecked and another wiped out! 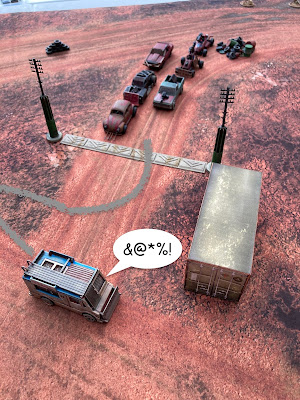 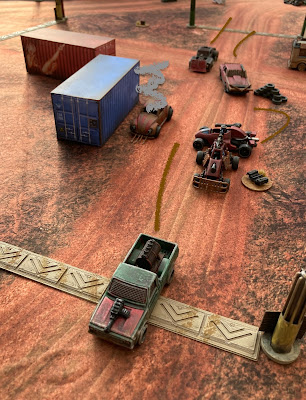 The race started to open out. I'd expected the buggies to zoom up ahead, but somehow Mazda Mike dropped smoke on gate one and got into the lead. he then held on to it, cruising along playing the Eagles and enjoying a cigar. Further down the pack, the minigun buggy was tailing Mr Whippy, somehow managing to miss repeatedly with pretty much all of his shots, until finally deciding to zoom past him. 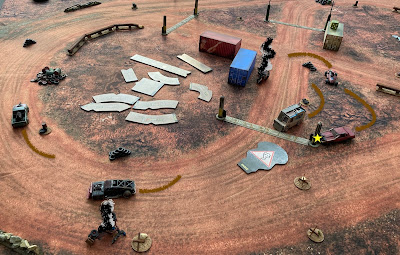 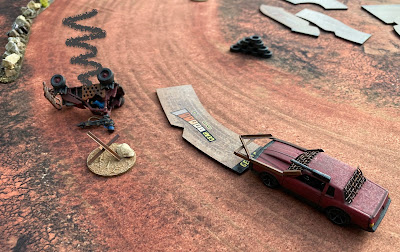 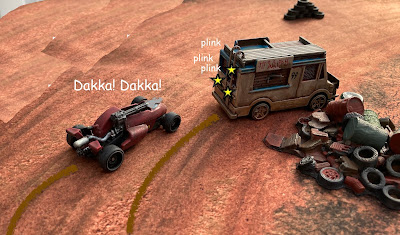 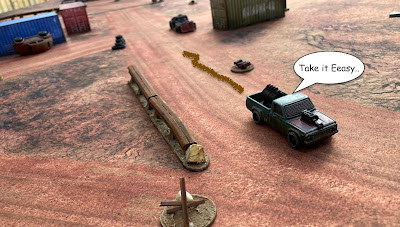 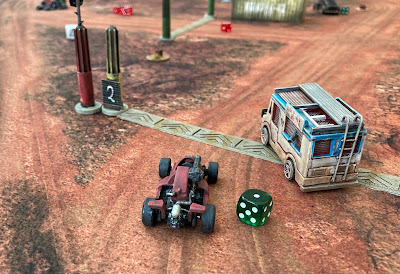 By Gate 3, it looked like the remaining sliding and skidding Reds were coming on at speed and were going to catch up with the leaders.. Mike panicked, shifting into 5th whilst still on the bend, causing him to spin off the track, leaving Firkle in the lead! The minigun buggy then took out Firkle with a well aimed burst and it looked like he might bomb through for the win.

At  this point though, Mazda Mike showed his true mettle, spitting out his cigar, he threw his vehicle into a reverse hard turn, right into the path of the buggy and fired his handgun.. this took out the buggy which flipped harmlessly over the Mazda.. calmly Mike turned the volume up and turned for the finish line, being the first winner at the Ruddington Raceway! 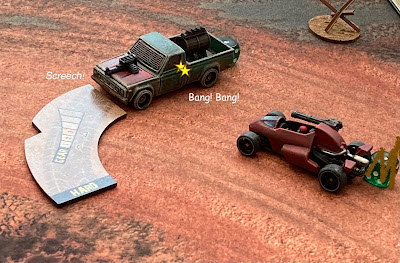 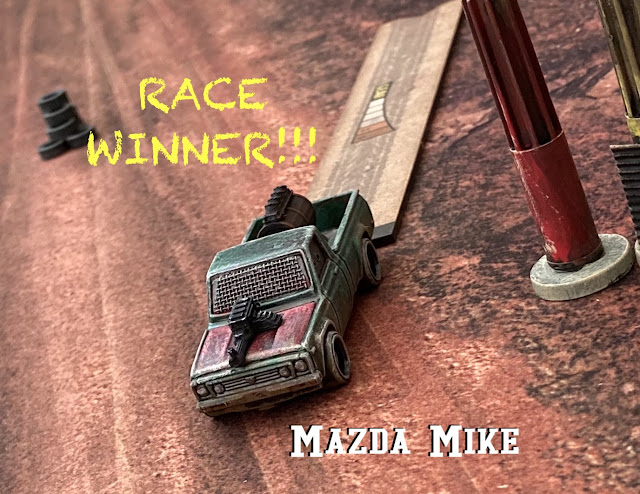 Good fun! Hopefully we can rope in one or two others for some multiplayer action (Although Tom is likely to refuse to play unless we can find some Sylvanian Families cars apparently?)