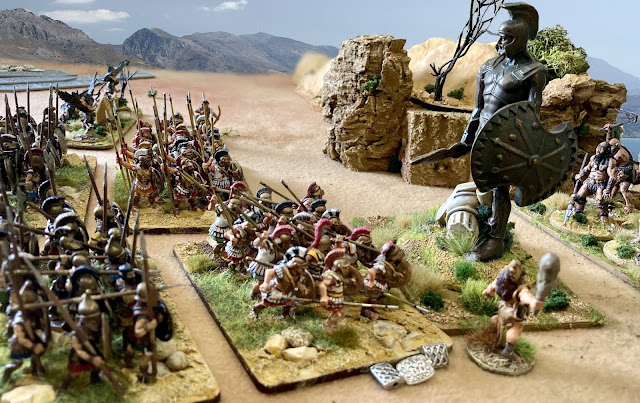 Today I took myself out of self-imposed isolation and joined the chums for a cracking game round at Tom's.

James had devised a scenario, one of a series that will depict the saga of Basil and the Argianauts. No doubt, more of this will appear at James' own blog soon. We were using his Midgard rules. It's a been a little while since I played and most of the rules I remembered had changed! (they are in play test).

I won't provide a blow-by-blow. Scrivs and I took charge of the good king Minossos and his allies, a tad peeved by a raiding bunch of Greeks who had stolen our stuff and were now trying to scarper. They were led by James and his son, whilst Tom gamely looked on, taking pictures and offering tactical advice*. We held two passes through some otherwise impassable terrain. Our small force looked terrifying as the mighty bronze Talos looked over the field and clouds of screeching harpies flew toward the approaching Greeks.

It was nip and tuck stuff. The mighty bronze Talos fell at the first combat, brought down by no less than Hercules himself, but the Greeks suffered losses too as they pressed into the Cyclops and Cretans. Eventually the last Cretan hero fell and the greeks made off back to their ships, and on to the next theft/adventure!

Good fun and a great looking game.. the figures belonged mostly to James and me, with a few supporting characters from Tom's collection. (It was great to get my hoplites out on the table again, a right old mix of Foundry, Lancashire games, Victrix and a few unknown)

*Mostly, but not always, 'Charge them in the face' 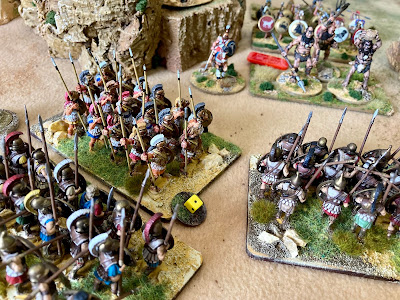